The Charity in its existing form was created in 1918, combining charities that dated back almost three hundred years:

There is evidence that the original almshouses were near to the chalk pit on the Fetcham/Great Bookham border, with inhabitants allowed to sell chalk from the pit to help maintain themselves. In the early 1800s, new almshouses were built on the present site of the Reading Room, at a time when the population lf Fetcham numbered around 300. 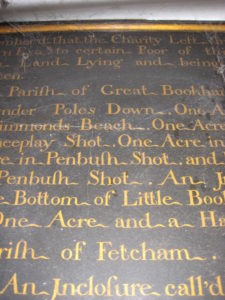 In the 1880s, part of the land owned by the Charity was sold to the railway, with the funds received used to convert the existing almshouses to the Reading Room. This coincided with the building of five new almshouses at their current Morley Court location, funded by three local donors - the Moon family, the Hankley family and Gervais Purnell.

In the early 1980s a new block of six flats was built at Morley Court and the original almshouses rebuilt as four flats.

The Reading Room is now used for a wide range of activities by suitable organisations.

The Charity is managed by Trustees, following rules established in consultation with the Almshouse Association and the Charity Commission.

We are listed on the Central Register of Charities, maintained by the Charity Commission for England and Wales.